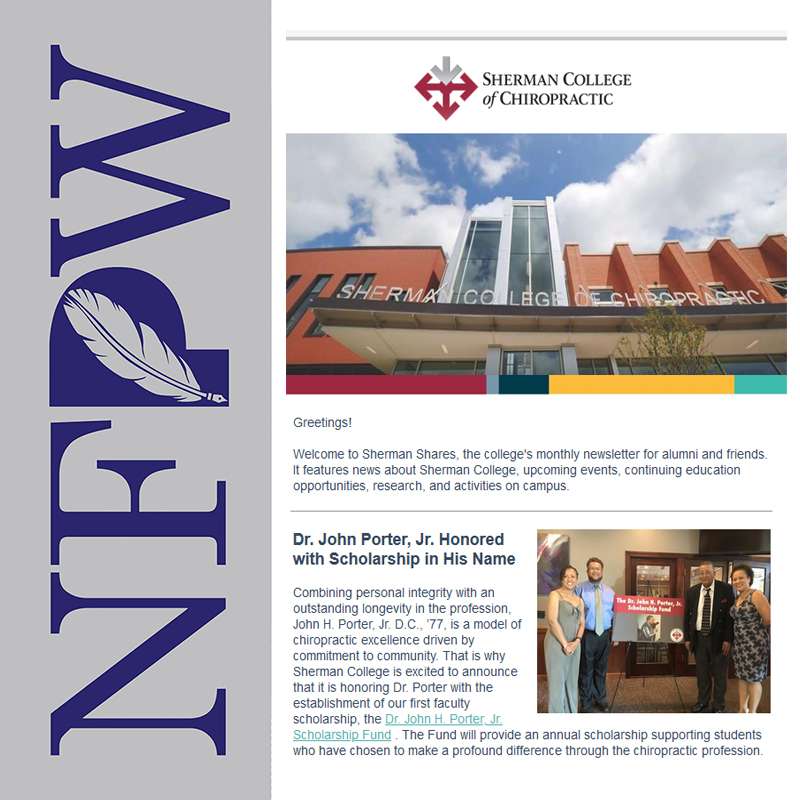 Four of Sherman College’s key marketing and communications projects have been recognized at the national level, taking home second place and honorable mention prizes in the National Federation of Press Women (NFPW) Communications Contest. Before advancing to the national contest, an annual competition that encourages and rewards excellence in communication, the entries won first-place honors in Media Women of South Carolina’s statewide contest. More than 1,800 entries were submitted in this year’s national contest.

Two Sherman College entries earned second place in the nation, including a speech written for Lyceum 2019 and a print advertisement for the college’s Chiropractic Health Center. Receiving honorable mentions were the college’s enewsletter, Sherman Shares, and the Gelardi Student Center Ribbon Cutting Campaign. Senior Director of Marketing and Communications Karen Brower Rhodes, M.B.A., produced these communications in 2019 as part of initiatives spearheaded by the Office of Institutional Advancement and Public Relations. 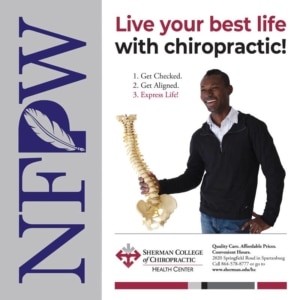 Vice President for Institutional Advancement and Public Relations Ohmar T. Land, D.M., was pleased to see the college’s work honored nationally for the third consecutive year. “Karen’s continued provision of high quality work is thoughtful, intentional and shows her commitment to deliver on the promise of impactful work,” he said. “As the college continues to evolve, so must the communications that we produce. Karen’s work reflects a variety of meaningful pieces that highlight her heightened level of awareness and the need to convey a solid brand worthy of national recognition.”

Feedback from the judge cited the appeal of the spoken word as well as print and multimedia projects in their relative categories. “I love the minimalism of this piece,” the judge commented regarding the Chiropractic Health Center advertisement for Spartanburg Little Theatre event programs. “It’s eye-catching and informative but doesn’t overwhelm the reader with too many messages.”

For the Lyceum “Next Level” speech, the judge said it was “all that you would hope for in a Homecoming speech – empowering, exciting and with enough fun and light-heartedness to leave the audience thrilled for the event.”

This is not the Public Relations Office’s first time receiving honors from MWSC or NFPW. Last year, the college had six first-place and one second-place awards in the state competition, with five taking home second place, third place and honorable mention prizes at the national level. Additional projects have been recognized nationally throughout the years, with a print piece for prospective students taking first place in the nation in 2014.