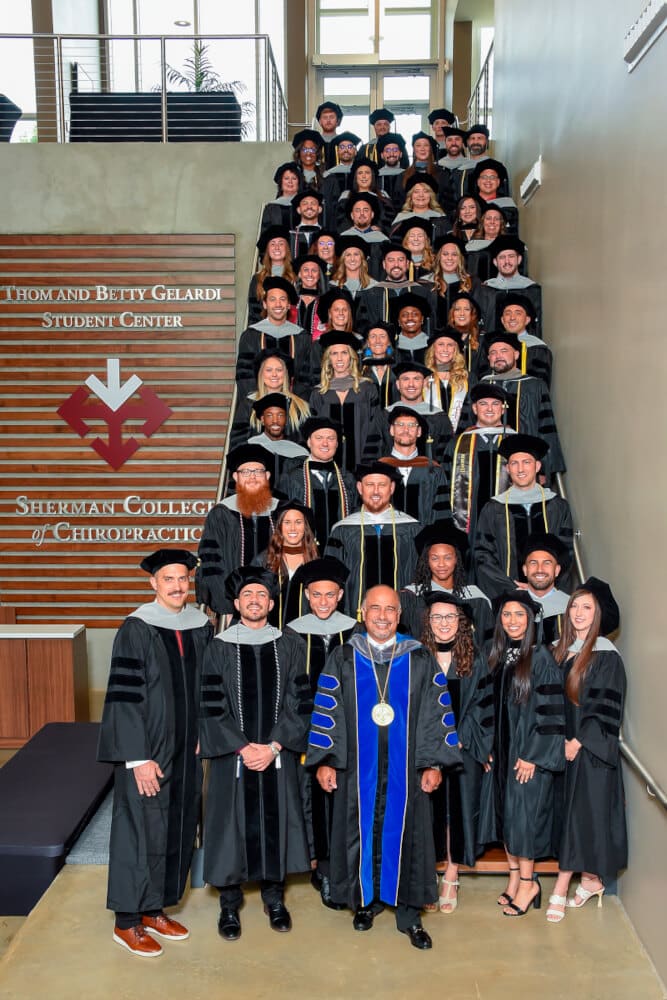 Fifty-three students from across the U.S. received the doctor of chiropractic degree from Sherman College of Chiropractic in Spartanburg, SC, on Saturday, June 11, 2022. The college’s 143rd commencement was a shared ceremony for June and September 2022 graduates. The college live-streamed the ceremony on Facebook and YouTube so that friends and family could watch.

José Samuel Rivera Rivera of Puerto Rico (June 2022) and Kristina Marie Bronkowski of New Jersey (September 2022) received the Milton W. Garfunkel Award, and each presented a farewell address to their classmates. The Garfunkel Award is the highest award given at graduation. Students receiving this honor must have a grade point average of 3.5 or above, and in addition, best exemplify a love of the profession, an understanding of the philosophy, willingness to share, and service to the college and community.

Rivera (June 2022) and Bronkowski (September 2022) also received the Clinical Excellence Award in recognition of their successful practices in the Health Center. This award is given to an intern in each class who has diligently worked to develop skills in the art, science and philosophy of chiropractic, maintained an A average in the clinical program and exhibited superior overall clinical performance and professionalism.

Assistant Professor of Clinical Sciences Princess Porter-Fowler, D.C., presented the commencement address. Porter-Fowler holds a bachelor’s degree in biology from the University of South Carolina Upstate (1998) and received her doctor of chiropractic degree from Sherman College of Chiropractic (2001). Originally from Spartanburg, SC, Porter-Fowler remains dedicated to her community, serving her hometown with chiropractic care at Porter Chiropractic Clinic for the past 19 years. She is a second-generation chiropractor; her father, John H. Porter Jr., D.C., is a 1977 Sherman College graduate who served on the faculty for 41 years until his retirement in late 2020.

Porter-Fowler is a member of American Black Chiropractors Association, a member of Delta Sigma Theta Sorority Incorporated, and is a past member of the USC Upstate Alumni Board of Directors. She is a graduate of the Spartanburg Herald Journal’s Focus on Leadership program and the Spartanburg County Foundation’s Grassroots Leadership Development Institute. She has been named Young Careerist by Business and Professional Women and honored as an Emerging Young Professional by Spartanburg Magazine. Porter-Fowler received her Webster Technique Certification in 2019 and recently completed her certification with the International Chiropractic Pediatric Association. Sherman College named her Faculty Member of the Year 2020, and she received the Spirit of Sherman Award that same year.