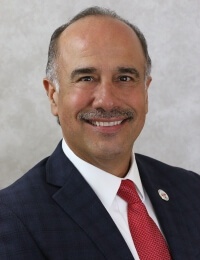 Sherman College of Chiropractic has named Edwin Cordero, D.C., as the college’s fifth president, effective January 1, 2013. Peter Kevorkian, D.C., chair of the Sherman Board of Trustees, made the announcement on campus Tuesday, November 13. Dr. Kevorkian says the trustees look forward to working with Dr. Cordero as he continues to advance the college’s mission of preparing students to become doctors of chiropractic through education, research, and service.

“I firmly believe the college has found in Dr. Cordero an outstanding leader who possesses not only vision and passion but also an individual who has demonstrated over the years his commitment to the chiropractic profession and the vitalistic tenets upon which the profession was built,” Kevorkian says. “I am confident that Dr. Cordero will lead the college and its students to face the contemporary demands and health care needs of the public while holding steadfast to the traditional values upon which Sherman College was founded. We look forward to all we will accomplish under Dr. Cordero’s leadership and guidance.”

Dr. Cordero, a 1993 graduate of Life University’s College of Chiropractic, is a practicing chiropractor in Boynton Beach, FL. He frequently speaks at chiropractic associations, conferences and other organizations around the world with the goal of inspiring and motivating chiropractors and students to make a positive impact in their communities and the world. The Florida Chiropractic Society named him Chiropractor of the Year in 2011.

Fluent in Spanish, Dr. Cordero practiced in Puerto Rico for a year before establishing his current private practice in Florida in 1995. He is dedicated to serving the chiropractic profession and has participated in humanitarian chiropractic mission trips; he served as chiropractor for the Costa Rican team in the Central American Olympic Games for eight years.

Dr. Cordero says he is honored to serve as Sherman College’s next leader. “My vision as president is to lead Sherman College in becoming the preeminent chiropractic school in the U.S. and the world, and to strengthen its cultural legacy of outstanding academics, chiropractic philosophy, excellent faculty, technique, and research,” he says.

Sherman College’s search for the next president began in May after Dr. Jon Schwartzbauer announced that he would be stepping down. After reviewing 20 applications and conducting preliminary interviews, the board narrowed the field to three candidates and released those names in October – Dr. Cordero, Dr. Joe Donofrio, and Dr. Shawn Powers. Schwartzbauer continued to serve as the college’s leader while the board conducted its search; his contract at Sherman ends on December 31, 2012.

Kevorkian says the board is grateful for Dr. Schwartzbauer’s leadership of the college. “So much has been accomplished during the past five years thanks to Dr. Schwartzbauer’s vision and his faithful service to the Sherman College,” he says. “The Board of Trustees sincerely appreciates the dedication, time and talent he generously shared with the college during his tenure.”

Sherman College of Chiropractic provides students with a comprehensive chiropractic education, preparing them to enter the field as primary health care professionals who are highly skilled, compassionate, ethical and successful. On its 80-acre campus in South Carolina, Sherman offers a first professional degree program unique in its approach to health care and known globally for the skill and art of chiropractic delivered by graduates. For more information, visit www.sherman.edu or call 800-849-8771.