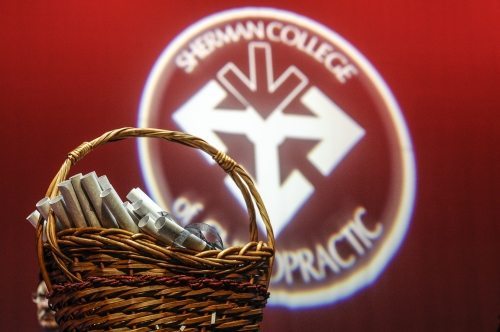 Twenty-five students from around the world received the doctor of chiropractic degree from Sherman College of Chiropractic in Spartanburg, SC, on Saturday, June 21, 2014. The commencement was a shared ceremony for June and September 2014 graduates.

Justin M. Berg of Illinois, a recipient of the Milton W. Garfunkel Award, presented the farewell address to his classmates. The Garfunkel Award is the highest award given at graduation. Students receiving this honor must have a grade point average of 3.5 or above, and in addition, best exemplify those qualities Sherman College would like to inculcate in all of its graduates: love of the profession, an understanding of the philosophy, willingness to share, and service to the college and community.

The Clinical Excellence Award was presented to Eric Nathan Goans of North Carolina for the June class and Gregory J. Russo of Georgia for the September class, in recognition of their successful practices in the Health Center. This award is given to an intern in each class who has diligently worked to develop skills in the art, science, and philosophy of chiropractic maintained an “A” average in the clinical program and exhibited superior overall clinical performance and professionalism.

Goans also received the B.J. Palmer Philosophy Distinction Award. This honor is given to outstanding students who exemplify the profound philosophical understanding necessary to translate the universal principles of life into the workable philosophy, science, and art which is chiropractic.

Also during the ceremony, chiropractic advocate, author, and speaker, Keith Wassung was presented with the honorary Doctor of Chiropractic Humanities degree, a rare honor given by the college to noteworthy individuals.

The doctor of chiropractic program at Sherman College requires students to complete more than 4,800 hours (14 quarters) of classroom and laboratory study and also includes an internship in the college’s on-campus Chiropractic Health Center. To enter the D.C. program, students must have at least 90 semester hours of college-level courses, including courses in the sciences.